Keith Howard and His Legacy 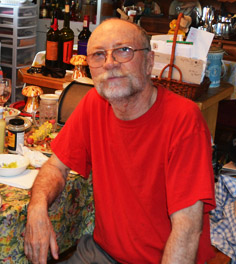 I met Keith Howard in 1997 up in the Alberta province of Canada, in the town of Grande Prairie to be exact.  Keith held his workshop there during the summers for printmakers from all over the map and as I had been getting mailers from him for years I decided to go and see what all the fuss was about.  I had a week to immerse myself in Keith's new methodology, making plates to print with a substance called ImagOn - a light sensitive film that is adhered to metal or plastic. 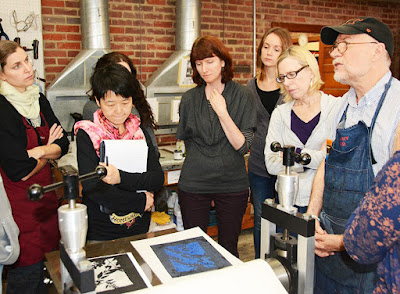 Keith Howard in a printmaking workshop

Keith had experimented with other forms of printmaking for years and had suffered from over-exposure to chemicals that had a lasting impact on his health.  Acids, kerosene, cancer causing rosins, toluene - these are just some of the materials to avoid in an old-fashioned printmaking studio and Keith wanted to clean up and get rid of these hazards.  He wanted to create his art, and didn't want his art materials to kill him in the process.  Did I mention that Keith thought through his process like an inventor, checking and testing all aspects of the work he was doing and finally writing books on the subject including "Non-Toxic Intaglio Printmaking", and "The Contemporary Printmaker: Intaglio-Type & Acrylic Resist Etching".

By the year 2000, Keith had moved from Canada to Rochester, New York to set up his School for Non-Toxic Printmaking at Rochester Institute of Technology, and with my recommendations he had been offered a place in the art school faculty and he settled in.  As an artist, Keith was making new images, especially large scale prints which are going on exhibition in the R.I.T. galleries in November and December as a way of celebrating his achievements after his untimely passing this past February. 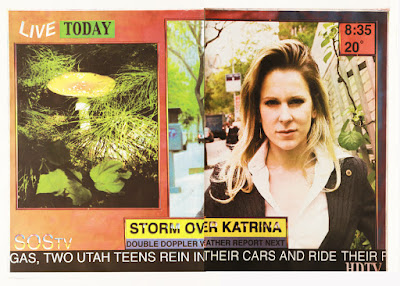 Visitors to the Bevier Gallery will see his set of prints called: "Pause, Fast Forward, and Play", and these images are built on the skills and interests that Keith had over many years of experimentation. Along with prints there will also be on view some select paintings from his recent series on the many guises of Eve.  Working with a model, Keith would photograph her in outdoor settings, and then the photos would be translated through Photoshop, and ultimately given to a painter         ( Mr. Linn ) to finalize as a vision on canvas.  People who visit the Bevier Gallery, and Gallery r will get to see a small portion of the many aspects of Keith's production after he came to Rochester to teach.

The majority of these prints originate in the photos that Keith would make and they sometimes are right off of the television screen and they are designed to look like the latest breaking news on channels like CNN.  Many times the images in his prints feature people Keith knew well, and the typographic commentaries are often ironic and humorous.

Keith Howard in conversation with Alan Singer and Friedhard Kiekeben at R.I.T.

Included in the show at The Bevier Gallery is a tribute portfolio of print images sent in by artists who knew and worked with Keith's printmaking methods and benefitted from knowing this remarkable man. A visitor can see a variety of approaches to see how Keith Howard's ideas on printmaking have been disseminated. 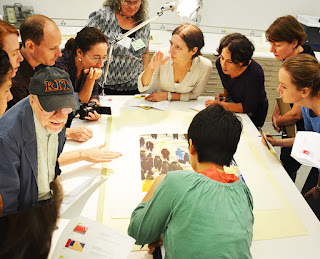