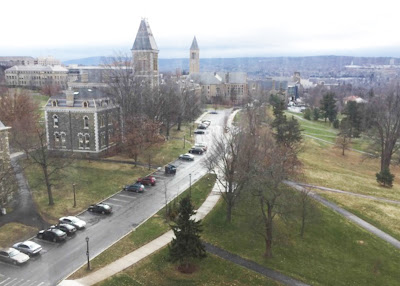 View of the Cornell University campus
from the Herbert F. Johnson Museum

My home in Rochester is being renovated so we are in Ithaca, New York.  We stop to see the Herbert F. Johnson Museum of Art on the campus of Cornell University where they are about to install new shows; so we go upstairs to look over the permanent collection.  There are always new aspects to their holdings and as we walked into the elevator I wondered about what we would see.

All of us have been so involved with the constant use of new technology that it is a bit of a shock to think about all of this art of the pre-modern era.  While not being pre-historic- much of the early art on view in the museum goes back a few thousand years and I can only speculate about the kind of lives these early artists must have had.  The ceramics and paintings we found in the Asian collections come from  ancient and visually sophisticated cultures, but the important thing to think about is that this art is part of a physical culture ("made by hand").  So much of what we do today ( and what we are ) is dependent on digital devices, that it brings up the question of what we have lost in the process.  Can one teach art without the requisite hand to eye coordination?  I know there is no turning back, but if the art we create is so mediated by "virtual Reality" - where will we find ourselves in all of this? 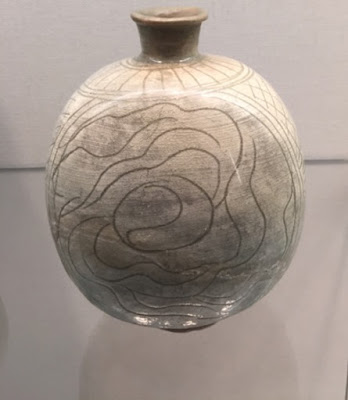 We get out of the elevator and look over the panorama of downtown Ithaca.  Grey, January day - but no snow - in fact a warm wet day after the most unusual warm December that I can remember.  Korean ceramics from a few hundred years ago look almost modern with incised drawing that could be made by Matisse.  I would love to see a whole show of this kind stoneware, I am sure I would learn a lot.  Around the corner were some recent ceramic works, and I found a slip-cast porcelain piece that was so architectural it could have been a working model for a building by Frank Gehry. 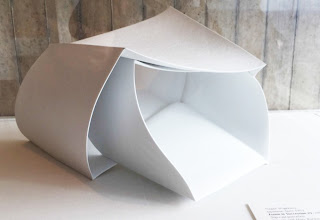 New for me in the Asian collection were paintings from Thailand which are elongated scenes with stylized figures and architecture, typical of that location.  What was not typical was that some of the marching figures in one painting were holding rifles. 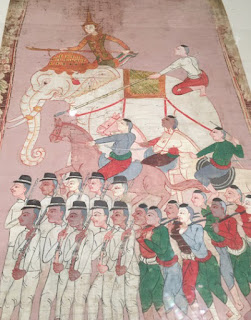 Down one floor we marveled over the Etruscan heads, and orange and black vase creations  and also carvings and mosaics from a land caught up in a deep crisis today: Syria.  For me there was a deep sense of sadness when I think of the devastation brought on by the civil war there to say nothing of what it was doing to the people who have fled.  Why historic relics must be destroyed ( Palmyra ) I can't fathom, it seems like censorship of the most extreme and irreversible kind. 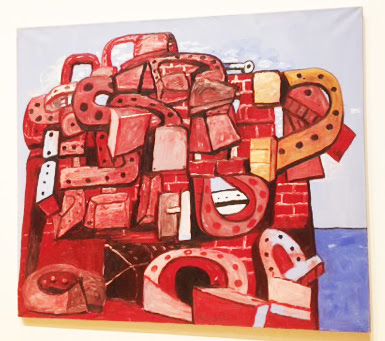 Can you imagine a crazy scenario where the legacy of many generations was just trashed?  For what purpose?  Who stands to benefit from this? - it makes my head spin.  I needed some fresh air, so we left the area, but I looked a little more at the contemporary art on display.  I think Philip Guston has it about right. 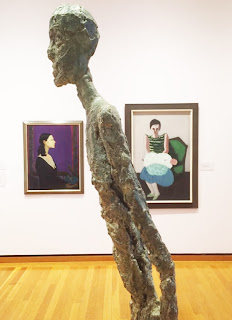 Giacometti takes it in stride and in its austerity I begin to feel some energy and some hope.  The shop windows are all closed today in the Paris that Stuart Davis represents in his oil on canvas called Place des Vosges.   I  think about Paris, and that spot which now reverberates with the necessary rebuilding of the spirit that must take place in this city of light in France.  Ever vigilant. 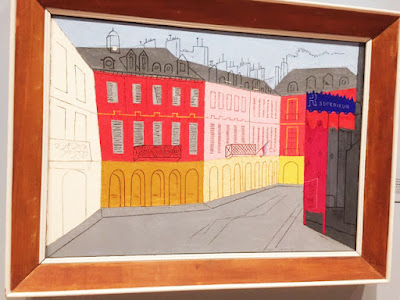