For "The Visual Artworker" I take the time to go and see what is on view in galleries and museums because writing these posts sharpens my memory of what I have seen.  When I am not teaching art, I am working in my own studio on painting and printmaking and also I am always curious to see what others are producing.  When I was a student in New York City the trends in the visual arts were easy to spot - abstraction, Pop Art, minimalism, earth art, happenings, photo realism, neo-expressionism - the imperatives were diverse but trends did dominate the moment.  Here, in 2016 it is a bit harder gazing into the crystal ball to discern which way visual art is heading.  Since the advent of the internet the arts have become fragmented, with constituencies for each branch of the arts, and loads of speculation on all of this production.

The only good that a trend had for me as an artist was to measure myself against what has become fashionable.  I also wanted to get to the bottom of why people found it so important.  Often this search for meaning in these art forms was very valuable and helped direct me down the path I took.

A discussion about the various strengths and positions that some kinds of art held helped give me a vocabulary and a way to describe what I did in the studio. 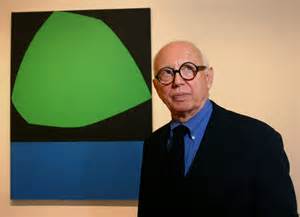 I felt this kind of clarity recently reading a description of the art of Ellsworth Kelly who recently passed away.  He claimed to avoid the trends, and because of that people came to his art later in his life.  I thought of Kelly's paintings as being rather minimal, and certainly formal abstraction of his kind imposed strict rules - or at least that is my point of view looking in on the art, rather than what Kelly himself has said about his paintings. 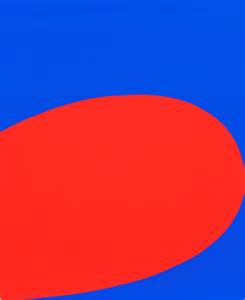 Kelly had one of the most powerful one-man shows at the Guggenheim Museum in New York a few years back.  His art could stand its ground within that Frank Lloyd Wright setting, and not much else has done that for me in that building.

Today, it was great to get out to see some new things, like an opening at Gallery 96 just above Bushnell's Basin, and also a studio visit I made in Victor, New York.  At Gallery 96 you can find "The Nature of Things" a new exhibition by four photographers in our area.  I had a nice chat with Dr. Chris Cove, who has large scale color prints of snowy owls.  He remarked about how he has gotten to know a few of the individual birds that he found in his lens, and I think if you know birds - you can sometimes tell snowy owls apart by their markings. 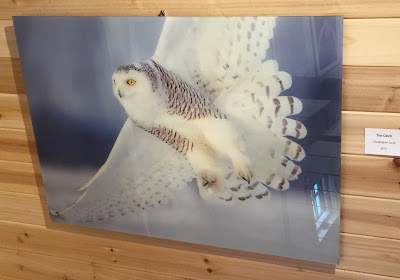 Snowy owls show up in New York when their favorite prey are scarce in their usual hunting grounds in Ontario and further north.  Many of these owls that Dr. Cove has photographed have been banded so ornithologists can keep track of their range.  Snowy owls also blend easily into the winter landscape and you might only notice them when they fly.  A few of Dr. Coves most dramatic images show them in the air, with their eyes flashing. 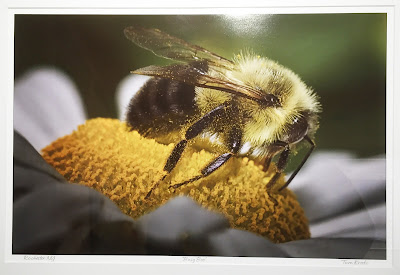 I enjoyed Betsy Phillips forest portraits, and Tom Kredo's "Busy Bee".  The fourth photographer, Gil Maker had some pleasant work on view and all of these prints made up a nice small show in this new gallery. 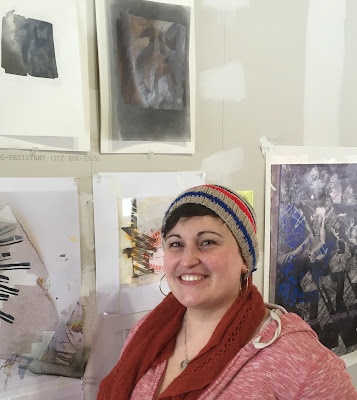 Just down the road in Victor, I met up with Rebecca Aloisio to see her new art in progress, and I was engaged in conversation with her about recent directions she was taking in her paintings that incorporate a variety of materials and processes that establish an interesting dialog within a single work.  Keep an eye out for her art - she had two large and wonderful abstractions in the recent Finger Lakes Show at The Memorial Art Gallery, so you have to call her an "Emerging Artist"!
Posted by Alan Singer at 2:38 PM