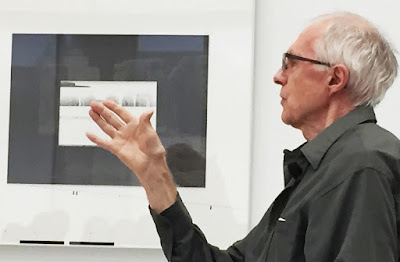 Walking into the University Gallery at RIT one day last week, I caught the presentation by graphic designer Kenneth Hiebert that included his original posters and photos projected up on a screen for some of his designs.  Having used one of the books that he authored as a guide to design processes in my classes at RIT,  I was interested in meeting this famed designer - who once worked with Armin Hoffman in the Bauhaus tradition.  Ken Hiebert had a long association with the Philadelphia College of Art  (PCA) before it became the University of the Arts and my brother had studied graphic design with him back in the early 1960s. 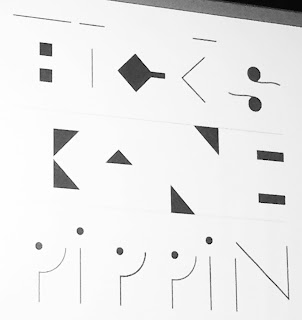 Kenneth Hiebert designs for the artists - Hicks, Kane, and Pippin

Ken Hiebert's talk could have been called: "The Raw, and the Cooked" with his designs and he even had one piece that was passed around through the audience so they could touch the textures of his hand lettering.  On the gallery walls there were photo images that Ken Hiebert had printed as part of a commentary  on the monument of Stonehenge.  He joked about the notion that his designs with these ruins could by ruined further if they had  suffered from poor production, and he gave us examples. 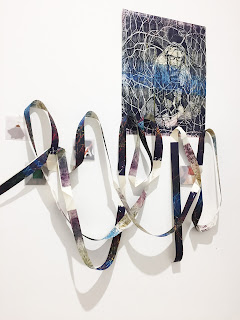 A celebration of graphics seems to be the underlying principle here this month as there are shows like: "Under Pressure 2018" - a joint project for RoCo and The Print Club of Rochester.  There are four featured artists:  Pamela Drix, Joseph Scheer, Kathryn Polk, and Bob Erickson.  Joseph Sheer also has some of his prints of colorful moths at the More Fire studio at 36 Field Street this month.

The exhibition at RoCo is subtitled  Redefining the Multiple, and the four artists take different paths to achieve that end.  I think that Pamela Drix may have the most experimental approach to this as she creates colorful strips that create a graphic impact on the wall that is much more radical than the Victorian look of Kathryn Polk's colorful lithography.  The majority of the images from Mr. Scheer and Mr. Erickson are photo based - and they are experimental up to a point.  I found the abstractions from Mr. Erickson to be engaging and unusual - it was hard to tell what I was looking at.  The series of works from Joseph Scheer told a story of political impact  and reminded me of a school of photojournalism that found an audience in the mid-twentieth century. 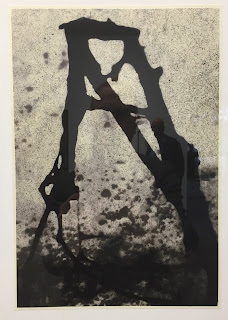 Bob Ericsson
in
"Under Pressure"
at
Rochester Contemporary Art Center

Drive down to Honeoye Falls, at the Mill Art Center to find the Annual Print Club show  now underway.  As you walk upstairs you are greeted by an image from illustrator and printmaker Bob Conge called: "A Lobbyist for Big Tobacco" ( this is a mono print with watercolor embellishments ).  Further into the show you will find a companion piece that has a real wit called: "The Corporate Vision". 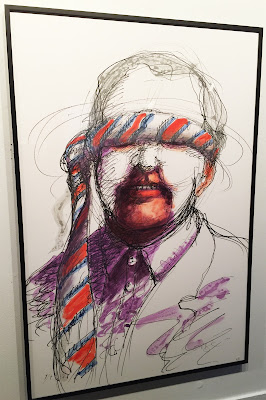 You will enjoy this show because it has a real vitality in the kinds of prints that artists are making and it runs the gamut from sedate traditional landscape to colorful abstraction.  I like the big print from Michael Harris called: Celestial Navigator" seen below. 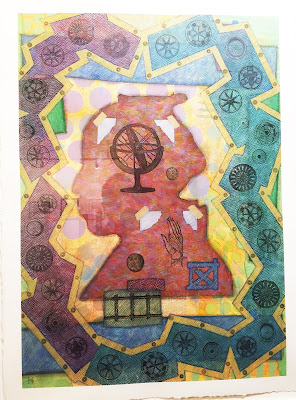 The Print Club exists to further understanding and appreciation for the printmakers and their medium. Prints also serve the needs of people who may want to collect art and want an affordable avenue towards  building  a collection or starting one.  At the Mill Art Center I found my print hung in a trio that included an image from Carol Acquilano, and a bright abstract from Kurt Pfeiffer.  Go over to see this show - you will certainly find something to like in this selection. 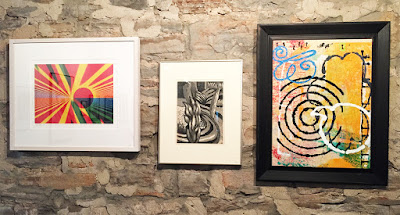