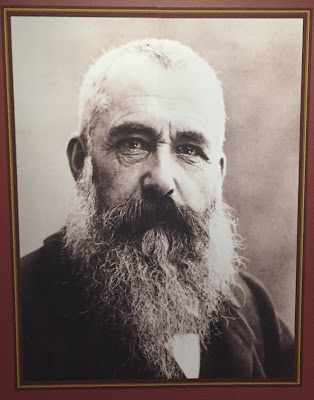 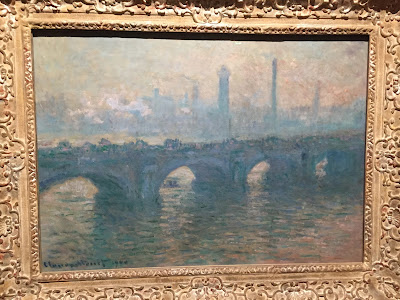 I was sitting with Nic Minetor during the New York State Ornithological Meeting last weekend hearing about the work he was doing as a lighting designer for The Memorial Art Gallery.  I told him that we were heading over to see the new show featuring the paintings of Claude Monet, and he was very well aware of the exhibition having planned some of the lighting schemes.  That is an interesting job- figuring out how to set the lights for these masterpiece paintings.  Also, part of the setting for the new show requires choosing wall colors that provide some contrast for the elaborate frames that can  sometimes seem to overwhelm a painting. 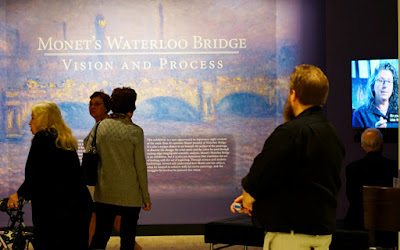 
"Waterloo Bridge, Vision and Process" is just a marvelous show and a wonderful way to get to know in depth the work of an Impressionist master at the height of his powers.  What I like most about the show is the size, and the concentration on this set of artworks that focus on a famous bridge seen mostly in a mid-distance series of paintings that are evocative and engaging. 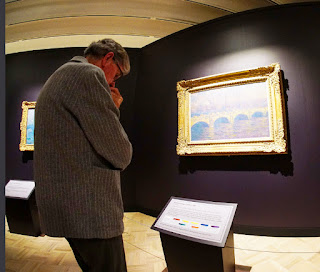 Walking into the show there are descriptive wall panels to read and the context is set for what is to come.  The first painting you come across is colorful with a minimum of detail - just some sunlight peeping out from a grey-green foggy day in London over the river painted en plein aire.  Some of the paintings in this series show the bridge backlit, while others have the bridge bright and dimensional. 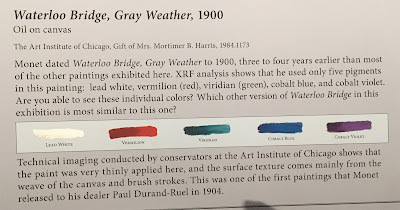 Below the paintings are the labels which tell the visitor not only the title of the painting but also give information about the colors that Monet employed to paint the canvas you are looking at.  We are given forensic evidence of the pigments found when these paintings were scanned and details were identified. 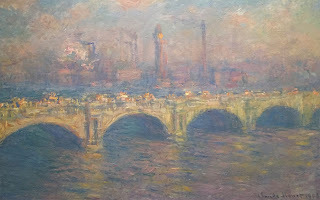 Waterloo Bridge as painted by Monet, tells you not only about the structure of the bridge and the traffic it bears - both on the bridge and in the water below - but also about the surroundings and above all the atmosphere that is built by the painter on each canvas. 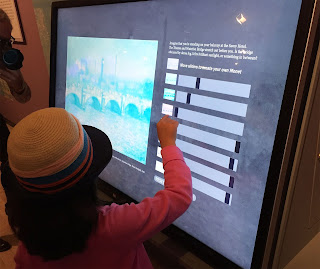 
I congratulated Director Jonathan Binstock on a terrific show and well attended opening.  I also commend the application of high  technology in a historic show of paintings from the past.  There is a revelation when Monet meets High Tech.  A series of interactive screens are set up to give the audience an idea of what would happen if Monet chose to change the color balance in one of his paintings.  Sliders - could give the painting more contrast or less, or show you what the painting looks like under infrared light for example.  Here we are seeing a painting the way a restorer might - through a lens that scans for textures or hidden layers that were subsequently painted over.

This is a new way to inform an audience and also reveal some of the process for making a painting the way Monet did - now over a hundred years ago. 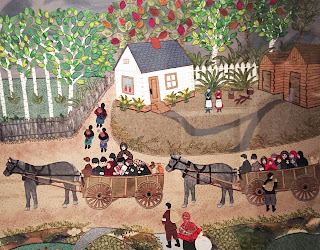 
If you are going to visit The Memorial Art Gallery don't miss the textile collages that are just down the hall from Monet.  Embroidery and cut fabrics are pieced together in these works by Esther Nisenthal Krinitz that tell a fearful story of family love and loss during the years of the Nazi regime of World War ll. 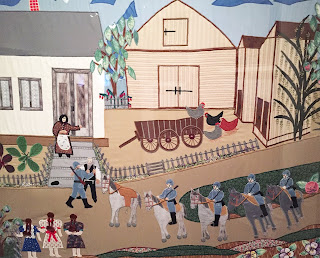 You are under arrest...