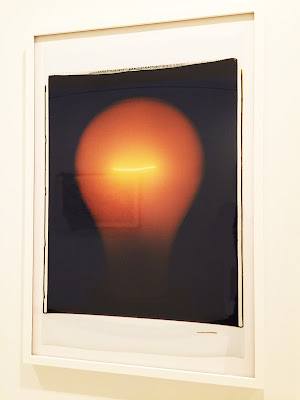 Last week when I was in Buffalo at The Albright Knox Art Gallery, I stopped to take a close look at a photo made by my friend Amanda Means.  The centered image is simple - a light bulb as a subject - it glows fiercely in this Polaroid print made in 2001.  This image represents light and energy; maybe hope and a singular beauty.  And her photo has influenced my own work, especially on my print below - a monotype I call "Importance of Light".  My image is an expression for a form of mathematics - a kind of visual algebra that describes a plane. 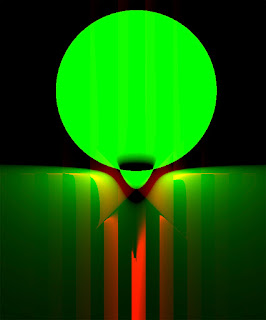 Looking deeply at a traditional artist's work, whether it is a pencil drawing or a painting, you can tell a lot about the personality behind the artwork, so the art is very revealing.  Like a handwriting analysis - artwork can reveal interesting factors, - and sometimes the idiosyncrasy of an artist - their choices that they make create a sense of style, and can be attractive to some and less so for others.

What happens when the motivation for image making is funneled through machine intelligence?  I am thinking now of what is gained and what is lost through digital art and artificial intelligence.  Today in the New York Times they employed algorithms to design Halloween costumes - does AI represent a direction that we are going to be taking in art?  I would hate to leave the task of creating art solely in the "hands" of a machine that is based on averaging out the pleasure we get that is usually found in the artist's work. 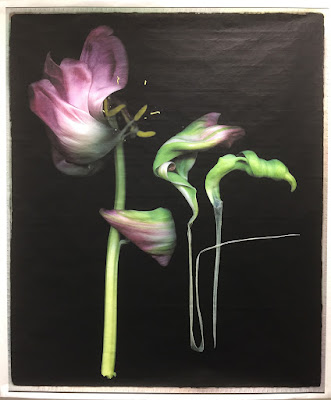 I doubt that such a program would bring us an exhibition of the sort that I found this week at the Geisel Gallery.  Patti Russotti mounted her show called: " Primal Invisibilia " featuring examples of things not easily viewed and documented through the lens of her camera ( or scanner as the case may be ). 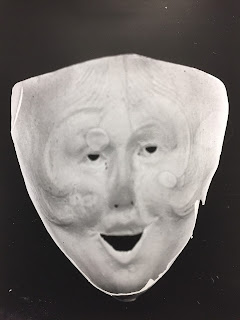 Along with her photographic pieces were monoprints using encaustic or hot wax on paper.  This very direct method of making an image reveals an organizing principle we bring to working with color, textures, and throw in the accidental and the unintentional. 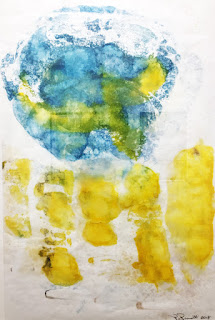 This month, thru November 24th, 2018 there is also an inspiring group showing at the Oxford Gallery here in Rochester.  Three seasoned artists - Barbara Page, Anthony Dungan and Phyllis Bryce Ely are exhibiting paintings in a show they call: "Transformations".  Of the three artists who show here, "Tony" Dungan has the more experimental approach to his use of color and applications which have a very expressive range.  His art for this exhibition takes the figure as a primary subject and then plays with the methods of representation. 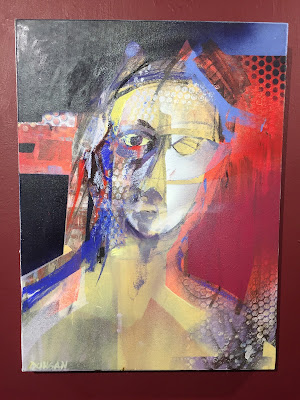 The jazz that enters the paintings from "Tony" Dungan plays out in layers and transforms his imagery through his process.  Sometimes his drawing in paint can remind you of Willem DeKooning and at other times it can be be Arshile Gorky.

In the past I have written about Barbara Page's map paintings and in the present show called: "Transformations" there are several new smaller works that are dedicated to places she has traveled to.  The map paintings may come from flights over the regional terrain, and they often have a prevailing color which may reveal the season, or what the land has been developed for. 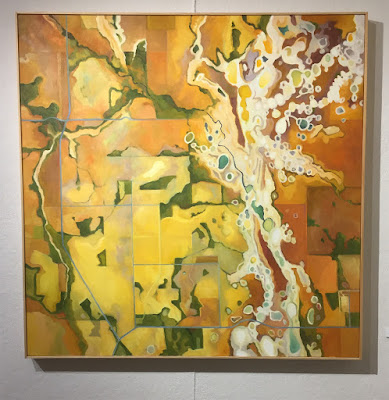 Phyllis Bryce Ely has a studio space in the Hungerford Building, and she is also part of this new exhibition at the Oxford Gallery.  Her subjects  can be a rugged landscape or the structure of a building in downtown Rochester - she told me a story about the "Wings of Progress" - that I found to be surprising.  As a youngster growing up here, she was afraid of the building and what the wings signified for her when she would drive by.  Today, she makes it a point to paint this building in a style that seems to quote Georgia O'Keefe. 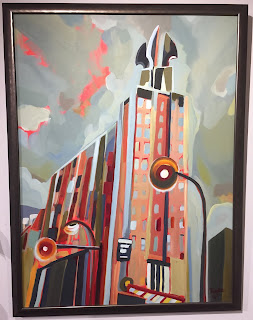 In another part of the Oxford Gallery show, Phyllis Bryce Ely presents a grouping of "Rocks I have Known" -portraits of these keepsakes - that reveal once again things that were previously unknown to us.  Little swirls, and textures cause you to think about the forces that created these stones.  I am a rock collector too, and have a pile of similar subjects in my studio, so I will have to look again and think about what could evolve.  Maybe just enjoy the simple beauty of how things are right now... 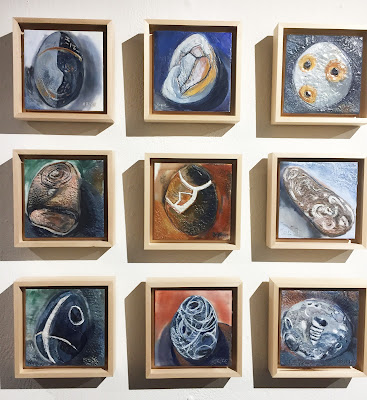 Phyllis Bryce Ely " Rocks I have known"
encaustic on panels