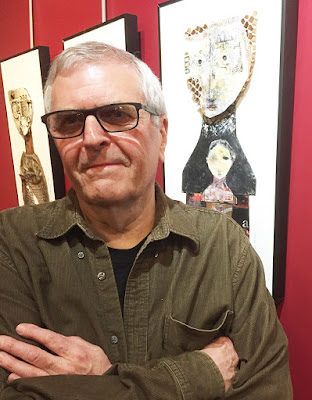 Richard Harvey at the opening for his show
at
MuCcc
142 Atlantic Avenue, Rochester, New York

This May is amazing.  There are shows here that you should not miss.  Some of the shows are on stage at GEVA like the one that celebrates the life of Son House:  "Revival" and the puppy musical called "Likah" - a wonderful service dog and a story of life and loss..  I had the chance to meet Son House when I was a teenager, and I also have had a chance to get to know "Likah"!

In the visual arts a new show has opened called: 2D, 3D "Extending the Process" with loads of art by Richard Harvey at MuCcc ( Multi-Use Community Cultural Center ) on Atlantic Avenue here in Rochester. 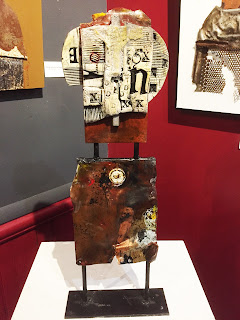 Introduced to Richard's artwork years ago, I have now seen it evolve to include ceramics this past year, and he uses clay to create some evocative facial features.  Richard says: "Facial expression is one of the most important elements of my images."  Looking over his present exhibition one finds collage, typography, and the use of the digital tools as well as the hand made and much more.  The faces and figures he creates have a style that makes a social statement like a constructivist Ben Shahn. 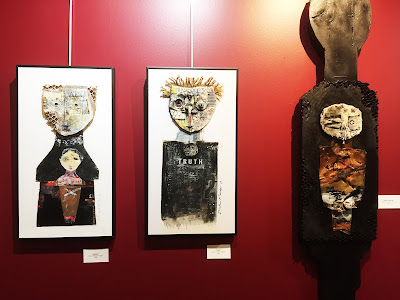 Left to right: "Mother", Truth" and "Safe Keeping" by Richard Harvey at MuCcc

Richard Harvey graduated from R.I.T. in the 1970s with his BFA and went to work as a graphic designer.  Now, years later he is in the studio on a regular basis and his art has grown and matured.  There is a humor often in his creations like the use of words in his collages that address various concerns ( like the inclusion of the word: emancipate in the artwork he calls: "Mother" ). Richard is a busy man - all of these pieces in this show have been created within the last year! 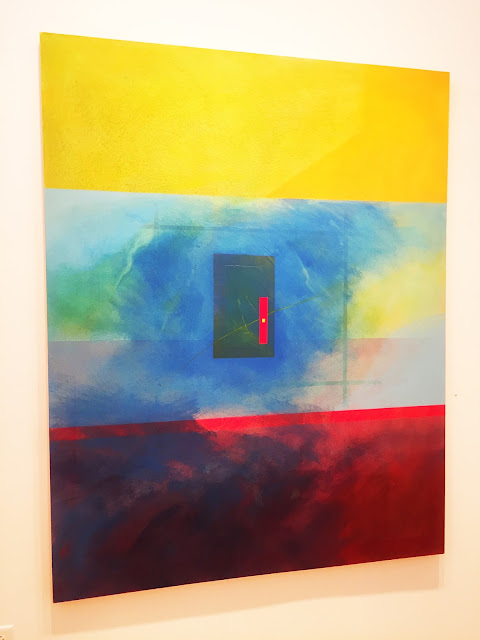 "Passage" Acrylic with collage on canvas by Paul Garland

Just up the street from MuCcc is the Axom Gallery, and I walked in to see the new show of paintings and collage from Paul Garland.  Paul has been featured in several shows at Axom Gallery, and that is most likely because the gallery owner, Rick Muto studied painting with Garland years ago at Oswego and got to know his work and his philosophy. 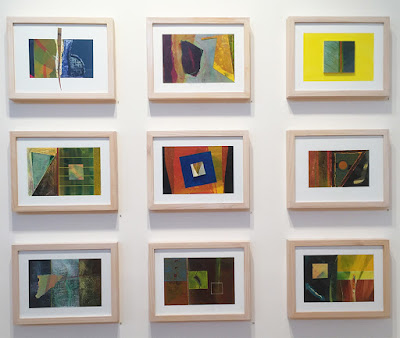 Paul Garland is remarkably consistent - there is always an inventive quest going on, and the means to an end revolves around color, structure, and with collage a certain restraint with the use of texture.  Many of the works on view are pleasing because of the color and form and several of these works are outstanding because of the eloquent distillations of the facts he likes to explore in his careful manner, balance being the prominent factor. 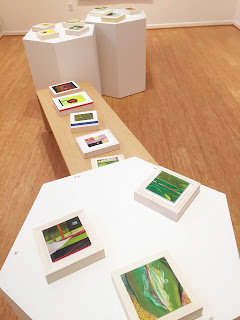 Paul Garland has been exhibiting his art for over fifty years, and this new exhibition gives one a sense that you are in good hands with a seasoned pro.  Looking closely at his collages he frequently plays one side off the other but in his bifurcated world that is played out in his art - there is not much that separates the sides except an experience of color.  You find that viewing the art you can really see the experiments going on like found textures when you scratch into wet paint, or lay a thread down and paint over it, then remove the thread and see what happens!

So look closely, and learn! 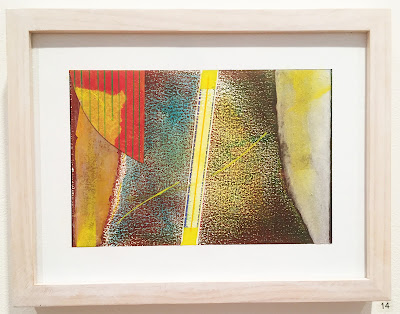 "Come In" a series of paintings with collage by
Paul Garland at Axom Gallery, Rochester, New York