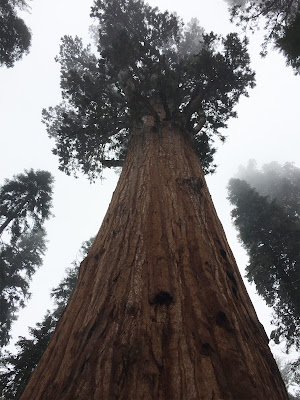 
Meet General Sherman!  On a "must see" list, I can introduce you today to the world's largest tree!

Not the oldest, nor the tallest tree ( which resides many miles up north of here ).  We met General Sherman on March 12th up in the Sierra Mountains where Sequoia National Park is located.  Let me tell you that everything you have ever heard about giant sequoias is dwarfed by the REAL thing!

To get up the mountain we had to try three times - who knew that these trees were in the snow?? - and we were told that we would need chains for our tires so we turned around and went down the mountain.  The next morning we found a tire chain rental place and learned how to put them on, and back up the hills we went.  When we got to the level where it becomes mandatory to have the chains on ( 7000 feet above sea level ) we found that the chains we rented were too small!  Back down again... our frustration mounting!  Finally,  found a place that had chains for our tire size, and we roared back up the mountains.  The only way to get around in the Sierras - you need snow tires and a four wheel drive vehicle.. 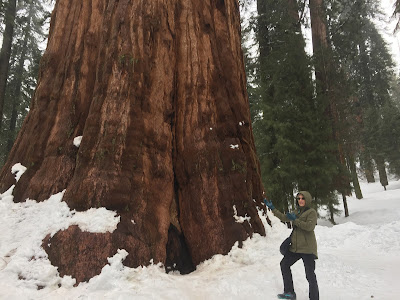 
When I was practicing my botanical art for the National Geographic Book Division, I did some illustrations of the Sequoia, but I had never seen the giants in person ( in the 1980s they did have a sequoia in the Brooklyn Botanic Garden - maybe twenty five feet tall which  I used as a model) 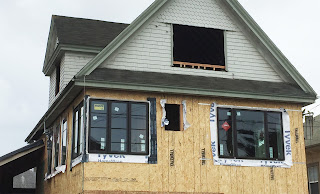 The neighborhood is in Oakland, California

To backtrack a bit for my readers, we have flown out west for a break; to visit family, and to see the sites.  We started out from Oakland, California where my son is building his first house.  His wife is expecting their second child, and we all got in the car  to drive over to the Oakland Museum of Art which overlooks a reservoir on Park Boulevard. 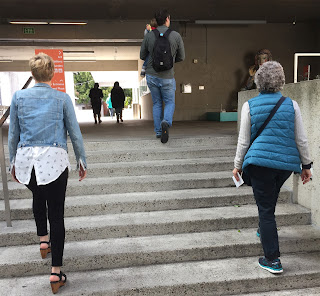 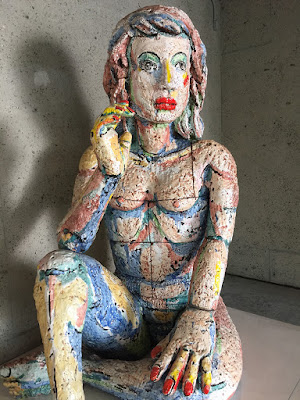 When you walk upstairs to the museum you are greeted by a larger-than-life ceramic figure created by Viola Frey - who if I recall correctly was represented in New York City by Nancy Hoffman.  I have to say,  that once inside the Oakland Museum - it works very well for young children - if you have a family.  My grandson was very entertained by many of the installations and he is not quite two years old! 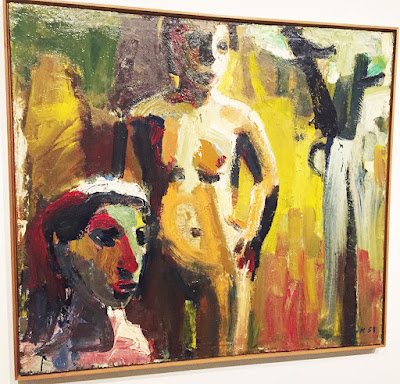 
Looking around the museum you see right away that the layout is not chronological - but rather there are pockets of artwork for various eras.  A good space is open for the Bay Area painters, so we have David Park, and Richard Diebenkorn for example.  There are some interesting abstracts on view, and other areas devoted to things like scale models and dioramas.

Towards  the back of the exhibition space there is a hall that features dinosaur bones, and painted charts of where to find hoards of great fossils ( hint: around Bakersfield !)   The museum has documentary photos, and a wide variety of craft items on view, some very startling... 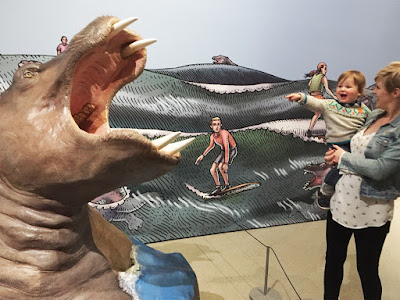 
Saying goodbye to family, we left Oakland and headed for the hills - and in between got a wide view of California's Central Valley which really is the breadbasket for our nation.  So many rows of blooming trees - we forgot that it is early spring here, since when we left Rochester, New York we still had many inches of  snow on our lawn. 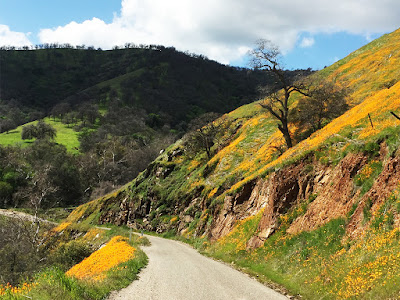 
I did have a chance to drive through ranch land, and found a sea of California Poppies blooming away on the hillside.  Such a warmth of color out there!  You have to see it for yourself!
Posted by Alan Singer at 5:15 PM